Hopkins is from #New York, allowing us to use that location tag to pull back, adjust focus and drop in on another artist, moving from effects-laden harp artistry to a captivating Bronx MC. 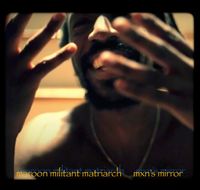 Bronx rapper Spiritchild’s fifteenth album is a thick, layered listening experience weaving together the sound of mid-to-late-‘90s East Coast rap, reggae, and other Caribbean music styles, and politically charged, aggressively delivered lyrics. On “we born free,” a menacing looped sample (either a distorted guitar or a synth pretending to be one) and a reggaetón-style beat provide a bed for acrobatic rhymes and a celebratory chanted chorus with a hook sharp enough to stick around long after the song ends. The entire album is explicitly political, but the centerpiece of both the musical and polemic aspects of the record is “gator bait (a dissertation to the soul of Black folx),” a six-and-a-half-minute history lesson, call to arms, and cultural celebration. Starting with a simple, airy beat overlaid with deep humming voices, Spiritchild’s lyrics lay out the album concept of the musician as a Maroon, using music as a weapon in the struggle for liberation and continued freedom.

Spiritchild incorporates elements of #reggae into his work, as does our next artist, though the influences of this sound are less literal here, instead becoming part of a tightly-woven fabric that is used to craft something fresh and original.

“Skip to main content      Accessibility My DCU | Library | Loop |  Skip to main content Explore Faculties & Schools Study at DCU Research & Engagement Offices & Departments Courses & Quicklinks School of Human Development School of Human Development About News & Events Research + Programmes People Contact DCU Institute of Education You are here Urban Art Beat Project On Monday the 12th March the School of Human Devlopment hosted the co-directors of the Urban Art Beat Project from New York, who offered a workshop on their unique style of critical revolutionary hip hop pedagogy. Rosa and Spirit introduced members of the HD School to the creative educational work they do with young Black and Latino men through the medium of music, spoken work and hip hop. The workshop which lasted two hours was part of our research and preparation for a School's celebration of the 50th anniversary of the publication of the ground-breaking educational work by Paulo Freire, Pedagogy of the Oppressed to be held next October. The participants (not all present here) explored praxis, challenges, and the relation between the new black art movement and possibilities for transformation in the communities where they work in the US and in a number of centres in Europe. The School members also explored the challenges involved in engaging with radical pedagogies and practices from within their own disciplines and practices. The experience was inspiring and full of hope and love. Zembylas following in the Freirean and emancipatory tradition calls us to as educators to engage in a "Revolution of Love"! This is the spirit of Urban Art Beat. 15th March, 2018 Share Student Email Staff Email Student Apps Staff Apps Loop Disclaimer Privacy Contact Us Important information regarding cookies and the www.DCU.ie website. By using this website, you consent to the use of cookies in accordance with the www.DCU.ie Privacy and Cookies statement. Yes, I agree ” - DCU

“THE MORAL ECONOMY A MAINSTREAM IDEA SPIRITCHILD AT THE #CHALLENGINGCAPITALISTMODERNITYIII CONFERENCE – EXCLUSIVE PROPAGANDA 18TH APRIL 2017MAINSTREAM IDEA  LEAVE A COMMENT SpiritChild, revolutionary hip-hop artist from around the world, gave a workshop and a performance at this year’s Challenging Capitalist Modernity III conference in Hamburg, Germany. Eddy caught up with him afterwards to get his thoughts. Join in on this Exclusive Propaganda to hear about the role of culture and hip hop in changing the world. Audio (download): Audio Player 00:00 00:00 Use Up/Down Arrow keys to increase or decrease volume. “A freedom singer from the South Bronx by way of Brooklyn, spiritchild uses the arts to cultivate a cultural revolution throughout the world, from the United States to Europe, from Africa to South East Asia.” This quotation doesn’t say enough about SpiritChild. His work and his music demonstrates the deep spiritual connection that we have with the world and with each other. Our conversation ranges from the role of women in the Kurdish freedom movement, to the origins of hip hop as the “bastard child” of black political culture, to how Spirit Child got his name. Staying in tune with and contributing to the pulse of young people’s musical and social heartbeat is at the core of this artist’s life work. spiritchild has extensive experience developing and leading workshops and programs on Critical Revolutionary Hip Hop pedagogy, songwriting and artist development. spiritchild has worked with homeless youth, youth offenders and young emerging artists as program director of One Mic and EAR (Emerging Artists in Residency) for Art Start and as a mentor, teaching artist and consultant for Urban Art Beat. Both are New York based nonprofit organizations that use the power of creative arts and music to transform youth. spiritchild continues to engage, inspire and uplift youth in community centers, juvenile detention facilities, high schools, colleges and universities throughout the world. This revolution is not only a political one, it is cultural as well, and it needs art just as much as it needs science. Homepage: http://www.xspiritmental.com/ Facebook: https://www.facebook.com/xspiritmental/ ” - Eddy

— THE MORAL ECONOMY A MAINSTREAM IDEA

“Peace and bliss planet rockers!This show features SPIRITCHILD. He is an inspiration to us all. From mentoring youth to ripping the microphone- he is Hip Hop.Watch as he breaks down his positive activities around the world and spins for us as well.Hosted by John Robinson, this episode will have you pressing rewind! VISUAL CAFFEINE-episode45-VISIONARIES from SEN ONE6 UZN on Vimeo.” - Visual Caffeine

“ INTERCULTURAL JOURNEYS PRESENTS FARAH SIRAJ WITH SPECIAL GUEST SPIRITCHILD October 10, 2014 Concert begins at 7:30pm Location: Ibrahim Theater at International House Philadelphia Tickets available for purchase through International House Philadelphia, or call the International House Philadelphia Box Office at 215.387.5125 then press 2. Tickets: $15 General Admission/ $10 for International House Philadelphia members/ $8 Students This concert is performed with generous support by Her Royal Highness Princess Alia Al Hussein New! Read the interview with Farah Siraj here.  Listen to the podcast here. Photo of Farah Siraj by Ann Blake.   Join us for our inaugural concert at the Ibrahim Theater at International House Philadephia with IJ artist, Farah Siraj, her Arabian Flamenco band, and special guest spiritchild. Farah and her band have performed across the U.S., Middle East, and throughout Europe for numerous dignitaries and populations. This concert will feature an upbeat and unique blend of flamenco, jazz, bossa nova, and hip-hop from self-identified freedom singer, spiritchild. BIO: FARAH SIRAJ Named Jordan's “Musical Ambassadress”, Jordanian virtuoso Farah Siraj balances a career that spans the United States, Europe and the Middle East. Farah has performed at some of the world's most prestigious platforms, including the United Nations, Nobel Prize Hall, the World Economic Forum, the TV show Good Morning Live in the USA, MBC TV in the Middle East and the Antena de Oro Awards of Spain. Farah has performed before HM King Abdullah II and HM Queen Rania of Jordan, HM King Juan Carlos of Spain, HRH Sheikh Mohammed bin Rashid Al Maktoum and HE Secretary-General of the United Nations, Ban Ki-moon. In addition, Farah represents Jordan annually on United Nations World Peace Day.            In 2011 Farah internationally released her album entitled NOMAD, funded personally by His Majesty King Abdullah II of Jordan. In NOMAD, Farah performs her original compositions, fusing influences of middle eastern music, flamenco, jazz, bossa and pop, with lyrics in Arabic, Spanish and English. The recordings took place in the Middle East, Spain and the USA, including more than 30 internationally acclaimed musicians from five different continents. In early 2012, after the success of NOMAD, Farah presented the world premiere of her new work, entitled The Arabian Jazz Project, featuring original compositions and traditional middle eastern tunes set to a jazz context. As a result of the success of The Arabian Jazz Project, Farah was chosen as one of the “Summer Stars of Jazz” by New York's The Villager Newspaper, and named “the Norah Jones of the Middle East” by New York Time Out. In addition to the productions of NOMAD and The Arabian Jazz Project, Farah currently leads an ethnically diverse quintet of Arabian Flamenco Jazz, with world-class musicians from the Middle East, Europe, the United States and South America, including music from all four regions.  Farah and her Arabian Flamenco Jazz band were flown in to Dubai in November 2012 to inaugurate the opening of the world's tallest hotel with a concert under the patronage of HH Sheikh Mohammed bin Rashid Al Maktoum. Farah studied at the prestigious Trinity College of Music in London and Berklee College of Music in Boston, where she was recognized for her lush Arabian vocals, as mentioned in the article “Out of Berklee, A Gift of Music” by the Boston Globe. Farah's music often expresses the reality of war and raises awareness for the urgent need for peace. In recognition of her humanitarian efforts, Farah was invited to perform at the 2012 United Nations Humanitarian Awards in New York. In addition, Farah's music was played before the United Nations Security Council before passing a legislation regarding the genocide in Darfur.  Learn more about Farah here: www.farahsiraj.com Hear more of Farah’s music here: http://www.farahsiraj.com/music.html BIO: SPIRITCHILD   spiritchild, as he is known, is a freedom singer from the south Bronx by way of Brooklyn, who uses the arts to cultivate a cultural revolution. He integrates activism and hip hop music production as the founder of the Movement In Motion Artist & Activist Collective. As the Rhythmic Poet of the Hip Hop Fusion Band Mental Notes, he uses his music to converse with his audience to the injustices facing the poor and oppressed, inspiring action on environmental and social justice in New York City and around the world. No one attends a session with spiritchild without leaving encouraged. His ability to draw out creativity and confidence heals those around him, and is the catalyst for deep analysis and social change. He is an instructor for songwriting and artist at several public schools throughout New York, and facilitates that process internationally on seasonal tours in Africa, South East Asia, Europe and elsewhere.  spiritchild has assisted with organizing regional conferences on climate change, he is highlighting disaster relief and environmental justice with black, brown and other oppressed people. He has also produced and recorded with and for award winning Grammy® nominee Maya Azucena, legendary Les Nubians, spoken word nuyorican poets champion Ainsley Burrows, X-Vandals & Ricanstructions very own N4P to name a few. Balance has been created by engaging and developing the youth with hip hop pedagogy as program director of One Mic and founder of One Mic Collective/Art Start working with youth offenders as well as in Children’s Village Dobbs Ferry New York Juvenile Detention Facility.   He has also worked with and for intellectually disabled and psychologically diagnosed adults in the Bronx. Find out more about spiritchild here: http://xspiritmental.com/band_bio/#sthash.4IICOgQ5.dpuf ” - Intercultural Journeys