"Bronx rapper Spiritchild’s fifteenth album is a thick, layered listening experience weaving together the sound of mid-to-late-‘90s East Coast rap, reggae, and other Caribbean music styles, and politically charged, aggressively delivered lyrics. On “we born free,” a menacing looped sample (either a distorted guitar or a synth pretending to be one) and a reggaetón-style beat provide a bed for acrobatic rhymes and a celebratory chanted chorus with a hook sharp enough to stick around long after the song ends. The entire album is explicitly political, but the centerpiece of both the musical and polemic aspects of the record is “gator bait (a dissertation to the soul of Black folx),” a six-and-a-half-minute history lesson, call to arms, and cultural celebration. Starting with a simple, airy beat overlaid with deep humming voices, Spiritchild’s lyrics lay out the album concept of the musician as a Maroon, using music as a weapon in the struggle for liberation and continued freedom.

Spiritchild incorporates elements of #reggae into his work, as does our next artist, though the influences of this sound are less literal here, instead becoming part of a tightly-woven fabric that is used to craft something fresh and original."

revolutionary freedom artist conducting the energy and frequencies of the people

A freedom singer/artist from the South Bronx by way of Staten Island, spiritchild uses the arts to cultivate a cultural revolution throughout the world, from the United States to Europe, from Africa to South East Asia. This artist’s eclectic and experimental fusion of true school Hip Hop, Funk, Electronica and Jazz continues to break the boundaries of the music scene. As spiritchild channels the frequencies of J Dilla having tea with Sun Ra, painting the silhouettes of Nina Simone remixing El-Hajj Malik El-Shabazz also known as Malcolm X, no one shares the time and the space without being moved in body, mind, heart and soul.  spiritchild integrates revolution and Hip Hop music throughout all his endeavors, as a musician, DJ/ soul selector, producer, writer, author, facilitator and mxntor for youth, cofounder along with Fred Ho of a new black arts movement, organizer and founder of the International Movement In Motion Artist & Activist Collective, Vice President of the Universal Zulu Nation's Brooklyn Territory (UZN Chapter 9 -Noble 9 Zuluz) and co founder and co leader of the maroon party for liberation and the maroon liberation school.

Both as a solo artist, since 1992 and as the rhythmic poet of the Hip Hop fusion band Mental Notes, since 1999, spiritchild uses music and various forms of art/writing to open conversations with the audience about the injustices facing the poor and oppressed and to inspire action on environmental and social justice in New York City and around the world. Next to releasing several solo albums and band recordings, spiritchild has been privileged to work with an array of artists from rEvolutionary spoken word activists The Last Poets, Amiri Baraka, grammy award winning nominee Maya Azucena, the legendary Les Nubians, Gill Scott-Heron & Brian Jackson’s Midnight Band, The Coup, Dead Prez to Brooklyn's Antibalas Afrobeat Orchestra.

Staying in tune with and contributing to the pulse of young people’s musical and social heartbeat is at the core of this artist’s life work. spiritchild has extensive experience developing and leading workshops and programs on ‘critical rEvolutionary hip hop pedagogy’, songwriting and artist development. spiritchild has worked with homeless youth, youth offenders and young emerging artists as program director of One Mic and EAR (Emerging Artists in Residency) for Art Start and as a mxntor, teaching artist, consultant and artitech for Urban Art Beat. Both are New York based nonprofit organizations that use the power of creative arts and music to transform youth. spiritchild continues to engage, inspire and uplift youth in community centers, juvenile detention facilities, high schools, colleges and universities throughout the world. this includes spiritchild's work in confounding commusaic, an international hip hop NGO that has received awards and grants by the Queen of Belgium in 2017 for his pedagogical work and vision expanding the mission of ‘critical rEvolutionary hip hop pedagogy’ specifically within prisons for young people now a successful reentry network within Europa.

Currently spiritchild is working with Urban Art Beat and the maroon party for liberation on Rikers Island providing 'critical revolutionary hip hop pedagogy' with young mxn and womxn from the ages of 16-21 since Black August 2017. spirit is also providing professional revolutionary developments on 'critical revolutionary hip hop pedagogy' and writing a book on the praxis. spirit has just released new albums 'timetales' with German Producer creativemaze, self produced album March of the Matriarch (Earth’s Day) and producing for various artist in the works of their EP and Album projects including European artist and pedagogue purplereaad ’80's baby’. spirit has just released his new album ‘maroon militant matriarch (mxn's mirror)’ a tribute for Black August 2021. spirit has been working with Musicambia and Carnegie Hall as well providing similar workshops with the adult male population at Sing Sing adding to master classes on the art of emceeing, production, songwriting and artist development. 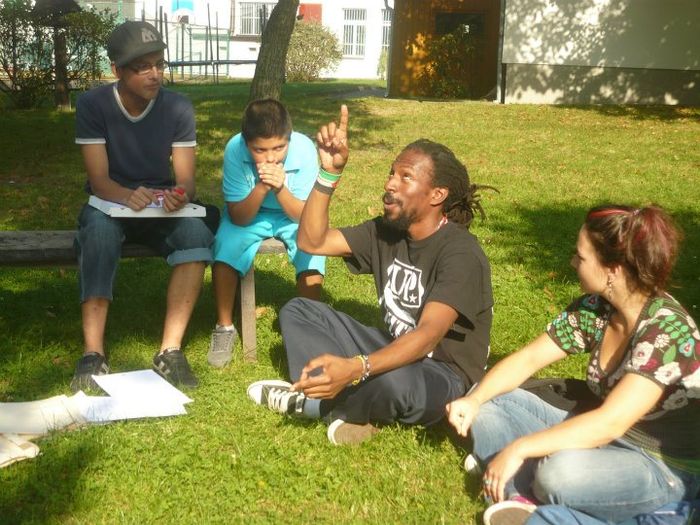 "When you think of Hip Hop Culture many people think of various ways to express oneself. I think of Hip Hop Culture as a way to educate the masses and elevate the minds of the Youth. By simply utilizing the elements as a tool, a tool that can assist many in obtaining many goals. Each element brings a powerful impact when it’s equipped with a master behind its controls. That is what one gets when they experience the inspirational words and soothing vibrations of spiritchild. His flow, rhythm and melodies bring you to the center of the universe. A powerful emcee bringing the masses a powerful message and it doesn't end there. Not only on the mic but also on the decks! A dj/sound selector who brings the sounds and rhythms that make our bodies move, from the elder to the Youth. He keep us grooving by selecting the vibrations that our bodies ask for while on the dance floor. spiritchild is one of my favorite Emcee’s, Activists, Selectors, Leaders....a Brother that brings Freedom to us all in many forms!" 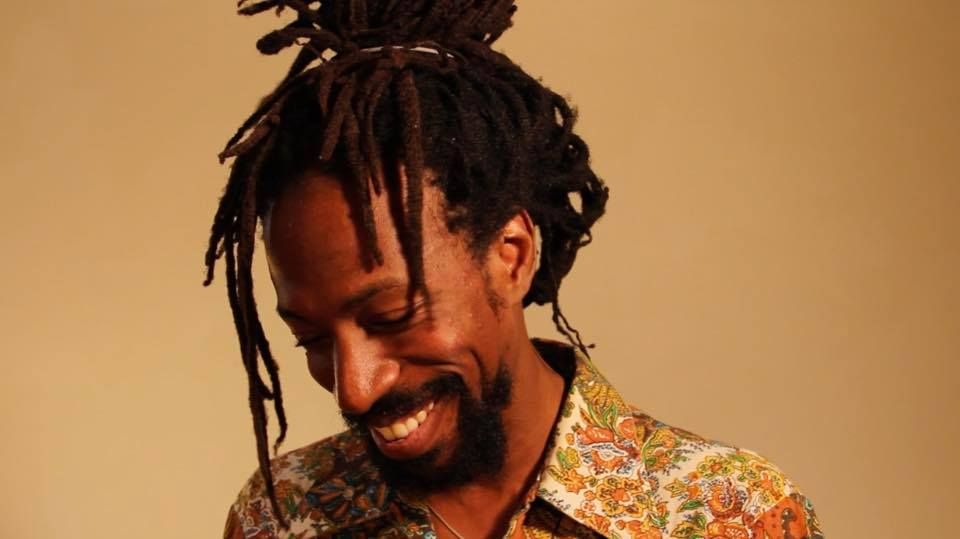 spirit is a rEvolutionary Somatica practitioner incorporating elements of sensuality, sexuality, spirituality and the various “realities” (our society and daily practical challenges) to holistically obtain desired effects of eroticism and greater intimate relations with self and the world that surrounds us.

spirit has 30 years of experience as a spiritual advisor and counselor along with; community organizing, mentorship, prison/school/community workshops on arts and exploration of another world for the liberation of all beings, being an international touring freedom singer (musician) who devotes songs that speak to liberation and a pedagogue that assist with the professional development with individuals as well as organizations. spirit has a B.A. in Psychology and Communications.

spirit offers experiential sex and relation guidance (coaching) working with parents/partners, lovers, rEvolutionaries and those seeking to improve their ever growing and loving relations providing tools to assist with self awareness, repair, inner child and having the sex and intimate relations you want and that are right for you.

we explore a mutually vulnerable experience while creating a *relation lab. we practice intimate relations starting with self and with others. this method is inspired and explored with the tools of the Somatica Institute. we will add various healing methods infused offering services on embodiment, sexuality and relationships.

spirit is an afro-indgenía maroon (of Puerto Rican and Jamaican descent) who was born, raised and currently resides in New York City. seeing clients in the New York, Tri State area and online.

*a relation (relationship) lab is one that is created by practitioner and client to be a safe, vulnerable and liberating container to practice the tools needed to obtain what you desire.

“spirit was thought-provoking as well as thoughtful, engaged and engaging, and challenged my students to new ways of thinking while appreciating them for their work. spirit is a dynamic speaker and a deep thinker who dives into difficult subjects with ease and grace, bringing the audience along with him. I especially appreciated his ability to weave body, mind and spirit back together with the ecology as well as our social environment, centering social justice as an essential part of the work of sex education and therapy.”

Dr. Rosalyn Dischiavo, Founder and Director of ISEE, professor, author, an AASECT Certified Sexuality Educator (CSE) and Sex Educator Supervisor (CSES), current Chairperson of the Professional Education and Steering Committee on the AASECT Board of Directors (2018-2020), Doctor of Education in Human Sexuality.