maroon leadership in response to Fidel

it'll be a testament to our historical memory banks to see if we can fill our minds with the deposited ideas of Fidel. as generations pass, what will our youth remember. our society is crippled and enabled by symbolism, conquistador reminders of who's street this is?, what monument is claimed? what named coined this or that foundation/institution?
even pass this dimension. a soul like Fidel challenges us to revolutionize our minds. remember not to forget. our purpose, beyond the naming and celebratory figure. behind the ideology.

on the other hand. i was seduced by Malcolm. the X. the black shirts. spike lee. the black arts. this allowed me to hear public enemy. feel a pulse. connect with a soundtrack, an image, a taste, an icon of revolution. it was never watered down no matter how diluted some attempts were at assassinating a charismatic character.

today, you will not see me wearing a Fidel shirt, or Malcolm per say with that same desire to "represent". it is etched in the fabric of my being. within the colour of my ideology and ontology. yet, that process of evolution was a necessary step for now. i only hope that our youth 7 generations ahead have exercised the imagination and quest for knowledge enough to want to explore and find that memory. that history for herstory. that journey of a revolutionary, for revolution. 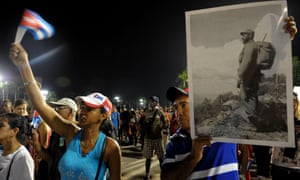 People pay homage to the late Cuban leader Fidel Castro on Saturday night during the last ceremony before his burial in Santiago. Photograph: Yamil Lage/AFP/Getty Images

Cuban President Raúl Castro said on Saturday his government would prohibit the naming of streets or public monuments after his brother Fidel in keeping with the former leader’s desire to avoid developing a personality cult.

The younger Castro told a crowd gathered to pay homage to Fidel Castro in the eastern city of Santiago that the country’s National Assembly would pass in its next session a law fulfilling his brother’s desire that, “once dead, his name and likeness would never be used on institutions, streets, parks or other public sites, and that busts, statutes or other forms of tribute would never be erected”. 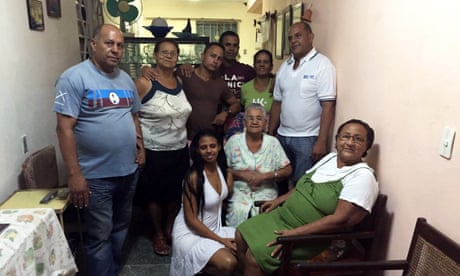 Three generations of Cubans united by gratitude to Fidel Castro

Fidel Castro, who died on 25 November aged 90, kept his name off public sites during his time in office because he said he wanted to avoid the development of a cult of personality. In contrast, the images of his fellow revolutionary fighters Camilo Cienfuegos and Ernesto “Che” Guevara have become common across Cuba in the decades since their deaths.

Raúl Castro spoke at the end of a second massive rally in honor of Fidel as Cuba neared the end of its nine-day public mourning. Castro’s ashes arrived on Saturday afternoon in Santiago, ending a four-day journey across Cuba that began after a rally in Havana’s Plaza de la Revolución.

Thousands of people welcomed the leader’s remains to shouts of “Fidel! I am Fidel!” Then hundreds of thousands gathered in Santiago’s Plaza de la Revolución on Saturday night, cheering speeches by the heads of state-run groups of small farmers, women, revolutionary veterans and neighborhood watch committee members.

The event was attended by the Bolivian president, Evo Morales, Nicaraguan leader Daniel Ortega and Nicolás Maduro of Venezuela, along with former Brazilian presidents Dilma Rousseff and Lula da Silva.

Mourning for Castro has reached peaks of near-religious public adulation across Cuba since his death, particularly in rural eastern Cuba. Huge crowds have been shouting his name and lining the roads to salute the funeral procession carrying his ashes from Havana to Santiago.