A new study suggests so – but don’t start sticking needles into your child. A detailed look at the results shows things aren’t so clear cut 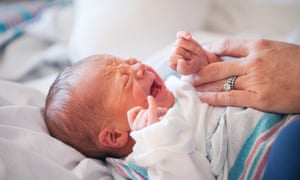 Your baby is crying inconsolably, suffering from colic. Do you: a) cuddle it, b) give Infacol drops or c) stick needles into it? According to a paper in the journal Acupuncture in Medicine, the answer may be c. Since colic affects up to at least 20% of babies, that could mean a lot of work for acupuncturists.

Colic starts in the first weeks of life and is usually over by three to four months. Babies are otherwise perfectly fine but cry in the early evening, and can yell for hours. No wonder parents feel desperate. The cause is unknown, with possible culprits including the mother’s diet during breastfeeding, cigarette smoke, the baby gulping too much air during feeding, inadequate burping and parental stress. Overstimulating babies has also been blamed. Super-sensitive pain signals and abnormal muscle contraction in the wall of the baby’s gut are the possible mechanisms that trigger the pain and bawling.

Acupuncture has been investigated before, with one small study showing a benefit and another showing no sign of relief. The latest study of 157 babies aged between two and eight weeks split them randomly between having ordinary care, minimal acupuncture (a particular technique) and Chinese acupuncture. It found that babies cried 40 minutes a day less if they were given acupuncture. Many of them, however, did cry during acupuncture.

Experts have been arguing over the statistical analysis of the paper. The sample is small and the researchers looked at lots of outcomes. I got a C at maths at GCSE, so I asked for help from Tim Cole, professor of statistics at UCL Institute of Child Health. He says: “The study looks at the problem (of how acupuncture affects crying due to colic) in lots of different ways, but then highlights only the ones where the acupuncture appears to have an effect. This is misleading, as it may simply be a coincidence. In addition, the size of the effect is very small, even if it is genuine.”

So the paper’s finding that acupuncture helps is likely to be exaggerated by the way the analysis has been done. It also isn’t clear that the group that didn’t get acupuncture were offered more traditional soothing techniques. These include cuddling and rocking your baby (putting them in a sling and dancing around), white noise from a vacuum cleaner or hairdryer and drops such as Infacol before feeds (which help relieve wind). You can also hold them upright while feeding to reduce the air they swallow. The evidence for all of these isn’t great either – but they don’t involve paying someone to stick needles into your child.