"4 You can build a vagina from a penis and scrotum

At first glance, vulvas and penises look pretty different, but they are actually quite similar. That’s because we all started out as foetuses with the same genitalia; our sex organs don’t start to differentiate until the end of the first trimester (around about nine to 12 weeks). That skin fold line between the testicles? It’s because the male scrotum is the homologue of the female labia majora. Learning that was a real “aha” moment.'

From the science of the orgasm to cannabis tampons, there’s a lot to learn. Warning: explicit content

Mae and I thought we were well informed when it comes to vaginas (between us, we have 58 years’ experience of them), but the more we researched the subject for our new video series, Vagina Dispatches, the more we discovered that, like most people, we don’t know our asses from our elbows – let alone our vulvas from our vaginas.

Does it matter that we don’t know what a perineum is, never mind where to find one? It turns out it does. Even though there are lots of parts of our bodies we don’t know well (neither of us can explain the full process from sandwich to stool), there is something particularly damaging about vagina ignorance.

Despite the fact that we spend more time peeing or menstruating out of them than anything else, sex remains the primary association when people think of female genitalia. And that emphasis distracts from the stuff that really matters: health. Women (or, to be more specific, anyone with a vagina) can struggle to understand how much menstrual blood is too much, what healthy labia look like, or what to expect during childbirth. Those blind spots make it hard to understand when or whether we need treatment. So, in a spirit of generosity, we wanted to share some of the things we learned.

1 That thing you’re calling a vagina? It probably isn’t a vagina

You’re likely thinking of a woman’s external genitalia. But that’s actually the vulva; the vagina is on the inside.

A survey released earlier this month by the Eve Appeal, a gynaecological cancer charity, found that two-thirds of women were unable to identify the vulva. More shocking is that women know men’s bodies better than they do their own: 60% of women could correctly label a diagram of male anatomy, but only 35% could do the same for female anatomy. 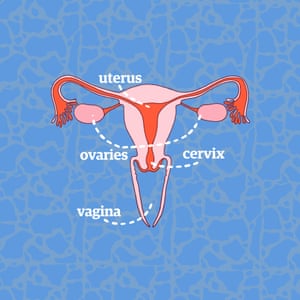 FacebookTwitterPinterest
According to a recent survey by Eve Appeal, half of women aged 26- 35 were able to label the vagina in a diagram like this one. Illustration: Laura Callaghan

These days, there are endless articles claiming every woman should have body confidence. Body knowledge, on the other hand, seems like a nice bonus. That emphasis is misplaced: if women don’t know what their vulva is, how can they check it for changes in colour – a potential symptom of gynaecological cancer?

2 No one really knows what a female orgasm is

The male orgasm isn’t exactly ambiguous. But there’s no standard way to measure a female orgasm, which means that research has begun to question whether some women are experiencing them at all.

Dr Nicole Prause is a neuroscientist who founded Liberos, a research firm that studies sexual desire and function. In men, as well as ejaculation, there are regular, measurable muscle contractions. In a 1980 study in the journal Archives Of Sexual Behaviour, 11 male participants all behaved in a similar way during orgasm: the muscles in their anus contracted in spasms that were 0.6 seconds apart and continued for 10-15 contractions. But in the women Prause has studied, while some had these same contractions, others reported an orgasm without any being measured. (How do they measure these? Using a butt plug that monitors sound waves.) We said we were interested in measuring our own orgasms, so Prause is sending us some. Stay tuned.

3 Orgasms can make you need a wee

From a biological perspective, there has long been curiosity about what function the female orgasm serves (from our own personal perspectives, the case is closed). According to Prause, one reason might be that women who orgasm are more likely to urinate after sex. And urinating after sex is a great idea because it helps prevent bacteria from getting into the urethra, reducing the chances of a urinary tract infection. Win, win.

The clitoris is often depicted as a little button. A more realistic image would be similar to the Starship Enterprise

4 You can build a vagina from a penis and scrotum

At first glance, vulvas and penises look pretty different, but they are actually quite similar. That’s because we all started out as foetuses with the same genitalia; our sex organs don’t start to differentiate until the end of the first trimester (around about nine to 12 weeks). That skin fold line between the testicles? It’s because the male scrotum is the homologue of the female labia majora. Learning that was a real “aha” moment.

We met Callie, an American trans woman who was waiting for bottom surgery, a procedure where a vulva and vagina are created from the penis and scrotum. Aside from price (the surgery costs around $20,000 and isn’t always covered by health insurance), we were interested in knowing what concerned Callie when she booked her procedure. We’d mostly been discussing aesthetics, so Callie’s response caught us off guard: functionality. She is considering whether she wants a vagina that would self-lubricate (this can be possible using tissue from the anus) and whether it would be painful to pee (the surgery is complex and recovery can take weeks). In other words, really important health issues that most women take for granted. Prettiness? Not so much. 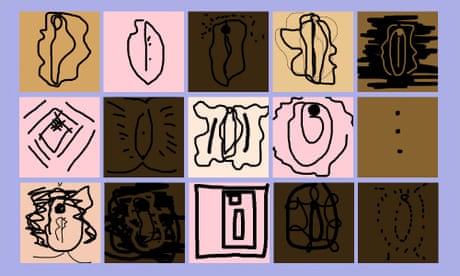 5 You can buy weed tampons

Menstrual cramps affect up to 91% of women, and can have a huge impact on quality of life. Given that so many women experience this pain, and that painkillers don’t always work, some women have tried alternative treatments including cannabis.

There’s very little scientific research into the effectiveness of cannabis in treating menstrual cramps, partly because that research would be illegal in many countries. But some entrepreneurial companies that are part of a growing US cannabis market are investigating. Once you’ve confirmed that you’re over 21 and a resident of either Colorado or California, the website foriapleasure.com offers a four-pack of “weed tampons”, priced at $44 (£33). It’s not actually a tampon; it’s a pessary containing cannabis oil.

Actor Whoopi Goldberg has teamed up with businesswoman Maya Elisabeth (who used to sell award-winning edible cannabis) to market products they claim are designed to provide relief from period pain. Their company, Whoopi & Maya, produces a bath soak, an edible spread (which “may be enjoyed plain with a spoon, on fruit or toast”), a rub and a tincture.

If you’ve been looking at medical diagrams lately (just us?), the clitoris is often depicted as a little button. A more realistic image would be something similar to the Starship Enterprise. Underneath the labia, there are two long structures that fall on either side of the clitoris (the protruding bit). If you’re interested in female sexual arousal, you should know about those – they’re called the clitoral crura. They can become engorged with blood when a woman is aroused, which causes the vulva to expand outwards, creating a tighter vaginal opening (bonus fact: women have nearly as much erectile tissue as men).

On the subject of sex tips: stop searching for the G-spot. Not only because it’s weird to use terms for women’s bodies that are named after men (the Gräfenberg spot, after the German gynaecologist Ernst Gräfenberg, who also developed the IUD). It probably doesn’t exist, at least not in the push-button way it’s often imagined.

An article published in Nature Reviews Urology in 2014, titled Beyond The G-spot, found that women can experience sensitivity in lots of different places, including but not always the area where the G-spot was thought to be (the upper side of the vaginal wall). In other words, it’s complicated.

Sex doesn’t always feel good – especially if you have vaginismus (a painful condition that results in involuntary vaginal muscle spasm) or vulvodynia(chronic pain around the opening of the vagina).

One possible treatment is pelvic physical therapy, which can involve external and internal massages of the pelvic floor area, and the use of dilators (they look like oversized plastic crayons) and lubricants. The treatment is frequently misunderstood, says Jessica Powley, a pelvic physical therapist. For one thing, it’s not just women, or postpartum women, who get this therapy; men can get it, too, to treat pelvic floor pain. You can also buy vaginal weights and create your own home gym to tighten your pelvic floor muscles.

If you’re under 60, the best sex of your life may well be to come

8 Things change with age, but it’s not all bad

Ageing, and menopause in particular, causes a woman’s oestrogen levels to decline. According to the North American Menopause Society, the vagina can become shorter and narrower in menopausal women who aren’t sexually stimulated. Then, when those women do have sex, it can be painful. Their advice? Menopausal women should have vaginal sex on a regular basis. So if you’re an older woman who enjoys sex, you should continue to have it regularly (hooray), and if you don’t enjoy sex, don’t bother (hooray, too).

What’s more, in 1998, the US National Council on the Aging found that 70% of sexually active women over the age of 60 said they were as satisfied, or even more satisfied, with their sex lives as they were in their 40s (74% of men in the same age group said the same). So, if you’re under 60, the best sex of your life may well be to come. 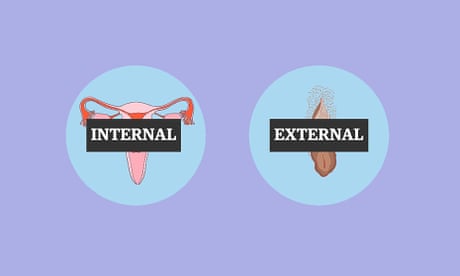 Vagina 101: can you pass this anatomy quiz?

Many forums for mothers confirm Christen is not alone. In a 1999 study in The Journal Of Perinatal Education, the author, Dr Viola Polomeno, explained that sexual arousal during breastfeeding “is a normal phenomenon”, although women often feel guilty when it happens to them. Arousal can happen because there are some parallels between breastfeeding and having an orgasm: both situations involve contractions of the uterus, nipple erection and skin-to-skin contact, and both can involve strong, uninhibited emotions. Neither of us has ever breastfed, but if and when the time comes, boy is this information handy.

10 You can make art with menstrual blood

From Judy Chicago’s 1972 installation Menstruation Bathroom to Ingrid Berthon-Moine’s 2009 work Red Is The Colour (photographs of 12 women wearing their menstrual blood as lipstick), lots of artists have explored the use of menstrual blood.

We met Jennifer Lewis, who was one day removing her menstrual cup and wondered why the blood on her fingertips disgusted her. With the help of her partner Rob, she began taking photographs of her menstrual blood in water. We watched Jennifer and Rob using refrigerated bottles of the stuff to make Beauty In Blood. The images look beautiful, but if we’re honest, the smell wasn’t so pretty. We went there to challenge our attitudes because, like so many, we think of periods as a gross inconvenience. We both use a hormonal IUD that stops us menstruating, which has always just seemed like a bonus.

Jennifer challenged these attitudes, not just because her art is beautiful, but also because she made us reconsider the health consequences of stopping our periods. Like us, Jennifer also used a contraceptive that stopped her period – until she found out it had caused her early-onset osteoporosis.

When Jennifer told us this, we looked at each other wide-eyed. Even though we had been researching this subject for months, there was still so much we didn’t know. The point is, we, like so many others, had put convenience ahead of being informed about our health. And that’s our final tip: get smart, get a mirror out and find out what’s up down there.